Where Do Pakistan-US Relations Go From Here? 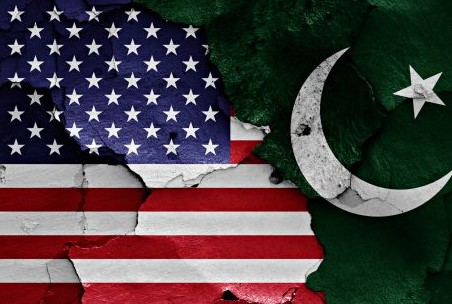 Following Imran Khan’s ouster amid public accusations of a U.S. conspiracy, how will the new government approach the relationship?

“I feel that I have won the World Cup,” remarked former Pakistan Prime Minister Imran Khan, who is also a famous cricket hero in Pakistan, as he briefly addressed his supporters at the Islamabad airport on July 29, 2019. Khan was returning from his maiden official visit to the United States, where he met the then U.S. President Donald Trump.

Islamabad, the capital city of Pakistan, is often described as a sleepy town. But the presence of Khan’s many supporters in the wee hours of the morning bespoke the success of the narrative that his party, Pakistan Tehreek-e-Insaf (PTI), advanced that this visit was a “successful reset” of the two countries’ lopsided relationship.

However, less than three years later, the same Khan turned hostile toward the United States and accused the country of hatching a conspiracy to dethrone him. He said that the U.S. had sent a threat through an envoy that if Khan stays in power, they will not forgive Pakistan.

Khan made his announcement as the opposition in Pakistan was campaigning to oust the prime minister through a no-confidence motion in the parliament. Khan termed the motion part of the foreign conspiracy and its movers as abettors of the United States.

After almost two weeks, Khan was voted out from power through a successful no-confidence motion in the National Assembly, becoming the first prime minister in the country’s history to be unseated by a parliamentary revolt.

Khan and his party’s elected speaker in the assembly had been trying to block the vote from happening, including by dissolving the parliament. But after an order from the Supreme Court, and deliberations behind closed doors, the assembly finally voted Khan out as prime minister of the country.

During his fight for political survival, Khan had said Pakistan’s National Security Committee, a top panel that includes civilian officials as well as the military and intelligence chiefs, had confirmed a plot to overthrow him.

But Reuters reported that “Pakistan’s security agencies have not found credible evidence to confirm Khan’s complaint of a foreign conspiracy,” citing “an official with knowledge of the matter, who declined to be identified.”

Elizabeth Threlkeld, a former U.S. diplomat in Pakistan and director of the South Asia Program at the Stimson Center in Washington, D.C., also dismissed the claims.

She said the accusations were a political ploy by Khan to position himself as the victim of a manufactured, groundless foreign conspiracy, while painting the opposition as disloyal to Pakistan. That is a tactic used by populist leaders around the world faced with political challenges, she added.

Opposition parties in Pakistan believe that there is no conspiracy, just a frantic attempt by Khan to escape from the opposition’s agitation in the country. If the alleged threat by the U.S. was so serious, they ask, then why would Khan first discuss this on March 27, and in public, despite the supposedly incriminating letter being received on March 7?

Senator Sherry Rehman, a former ambassador to the U.S. and part of the opposition in parliament, argued that Khan’s alleged attempts to create a false link with a foreign policy conspiracy is beyond spurious, it is mala fide and misleading. Security agencies have not found any credible evidence of a foreign conspiracy behind the no-confidence motion against Khan.

Rehman was Pakistan’s ambassador to Washington when ties between both the countries were at the lowest after the 2011 Salala incident, a clash between NATO forces in Afghanistan and Pakistani border security personnel that resulted in the deaths of 28 Pakistani soldiers. Rehman believes that, if the diplomatic incident as detailed by Khan is accurate, then the matter was mishandled from the start. Did Khan summon the U.S. diplomats in Islamabad after receiving the letter? If he had asked Washington to review the matter, why have the details of the U.S. response not been given?

Political analyst and public policy expert Mosharraf Zaidi also rejected the conspiracy by saying that these accusations are just a political stunt to regain the popularity that Khan has lost due to inflation and bad governance.

On the other hand, Khan and former Cabinet members continue to maintain that there is a genuine conspiracy against his government from the United States.

Confident about their stance, Ali Zaidi, a former minister of Khan’s Cabinet, stated that as per the communique received, the content does point toward a conspiracy against Khan’s government. It talks about the no-confidence motion, even before it was announced by the opposition parties in Pakistan.

He concluded that his leader was targeted for not taking dictations from world powers.

In July 2019, when Khan met Trump, the U.S. president offered to mediate between Pakistan and India on the Kashmir issue, implicitly rejecting India’s insistence that the dispute is a bilateral issue. Although nothing came of it, Trump’s offer made for heartening optics.

But with a change of administrations, the attitude in Washington toward Pakistan took a U-turn. Khan, too, started to shift away from the West and started engaging more with China and Russia. On several occasions last year, Khan began to criticize the United States, with an intensity that seemed to increase with each address.

In June last year, Khan told an interviewer, that he would “absolutely not” allow the United States to station forces in Pakistan to conduct cross-border counter-terrorism missions in Afghanistan.

A week later, when his government presented the financial budget in the National Assembly, Khan once again targeted the United States. During a speech, Khan said he felt disgusted when Pakistan joined the U.S. in the global “war on terror,” terming it the “darkest period of our history.”

In August, during the U.S. withdrawal from Afghanistan, when the Afghan Taliban had taken control of the Kabul, Khan praised them for having “broken the shackles of slavery.”

A months later, in his address to United Nations General Assembly, Khan criticized the United States for putting the blame on Pakistan for its failure in Afghanistan rather than appreciating Pakistan’s support and assistance to the U.S. in matters related to the country.

Zaidi, the political analyst, maintains that Pakistan supported the United States during its withdrawal from Afghanistan. But he notes that at the same time the U.S. was being targeted by Khan and his Cabinet members.

“Let’s not forget how senior Cabinet members likened the fall of Kabul to the fall of Saigon. Many important Pakistanis celebrated American ‘defeat,’ which undermined and devalued the substantial and important work Pakistan did to ensure damage control in terms of the aftermath of the U.S. withdrawal and the Taliban’s behavior post August 15,” Zaidi said.

“Eventually, the growing bitterness spiraled into this current crisis.”

Threlkeld of the Stimson Center, who was stationed as a U.S. diplomat in Peshawar, Pakistan, in 2014-16, also believes the U.S. withdrawal from Afghanistan was a key turning point in the Pakistan-U.S. relationship, but for a different reason. She believes that now that the United States has withdrawn from Afghanistan, “what we’re seeing is in part a leveling off of the relationship as it settles into a period of more limited engagement.”

Trade bodies in Pakistan are also concerned about the volatile relations with the United States, which is Pakistan’s largest export market. According to official figures, at least 21 percent of Pakistan’s total exports – worth an estimated $6.08 billion – go to the U.S.

Former Finance Minister Miftah Ismail, who hails from the leading opposition party, which has finally made it to the treasury benches in the assembly, said that if Khan’s anti-U.S. rhetoric hasn’t harmed Pakistan-U.S. trade, it is not helping either.

Ismail believes relations with the United States are especially important, “not just because the U.S. is our second largest market for exports after the EU, but also because the U.S. has influence around the world in international organizations such as FATF [the Financial Action Task Force], the IMF, and the World Bank.”

Zaidi believes that Pakistan is an inevitable middle power critical to three regions: South Asia, Central Asia, and the Middle East. Its importance does not diminish due to one party or leader.

Instead, Zaidi suggests that the political instability caused by the crisis may be the most damaging aspect of this fiasco. He points out that U.S. venture capital and private equity funds are vital to Pakistan’s startup culture. If investors see negative travel advisories and bad news about Pakistan, it alters the trajectory of the burgeoning IT and innovation economy, he added.

The upcoming government’s engagement with the United States will clarify whether the poor relations were due solely to Khan, or whether relations were frosty at the state level.

Even while the former prime minister criticized the U.S. at every opportunity, his army chief, Gen. Qamar Javed Bajwa, expressed a totally different opinion. Bajwa, speaking on April 2 at the Islamabad Security Dialogue, maintained that Pakistan has “a long and excellent strategic relationship with the U.S., which remains our largest export market.” Bajwa also expressed his desire for broadening the Pakistan-U.S. relationship.

Moreover, the army chief said that the Russian aggression against Ukraine could not be condoned. By contrast, Khan has been taking credit for a breakthrough visit to Russia, the United States’ Cold War rival, on the same day that Russia launched its invasion.

The statements gave a hint that there seems to be a civil-military divide on foreign policy of the government.

In the view of Senator Mushahid Hussain Sayed, the chair of the Senate’s Defense Committee, “Imran Khan was not necessarily anti-American but rather anti-Biden administration.” He explained that the former prime minister had good relations with Trump, who was publicly effusive about him when they met in July 2019.

Commenting on the future of Pakistan-U.S. engagements, Sayed concludes that the after Khan’s removal from the office, the United States “must be heaving a sigh of relief.” They would like to have a stable relationship with Pakistan, which Islamabad should also reciprocate, he said.

The relationship between Khan’s government and the United State began with the claims of a “World Cup”-style victory, but the game has ended for former sportsman-turned-politician Imran Khan. There could be various reasons for Khan’s disqualification from the political tournament, but if he is looking for someone to blame, he should immediately look to his own team, including the PTI, as well as the “selectors” – Pakistan’s military establishment. By Sheharyar Ali/ The Diplomat

After 36 years, a Marcos is again on the path to power.