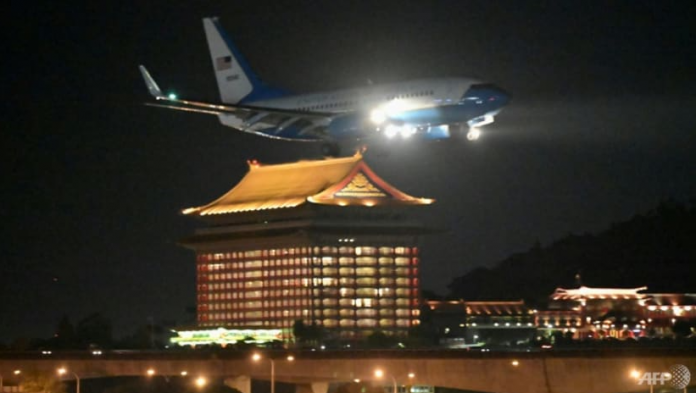 China’s military vowed on Tuesday (Aug 2) to launch “targeted military actions” in response to US House Speaker Nancy Pelosi’s visit to Taiwan, as tensions flare between Washington and Beijing.

“The Chinese People’s Liberation Army is on high alert and will launch a series of targeted military operations to counter this, resolutely defend national sovereignty and territorial integrity, and resolutely thwart external interference and ‘Taiwan independence’ separatist attempts,” defence ministry spokesman Wu Qian said in a statement condemning the visit.

Separately, the People’s Liberation Army’s Eastern Theatre Command said it will conduct joint military operations near Taiwan from Tuesday night, and will test-launch conventional missiles in the sea east of Taiwan.

The exercises will include joint air and sea drills in the north, southwest and northeast of Taiwan, long-range live firing in the Taiwan Strait, and missile test launches in the sea east of Taiwan, the Easter Theatre Command added.

The Chinese foreign ministry also said in a statement that Pelosi’s trip was “extremely dangerous”.

However, White House spokesman John Kirby rejected Beijing’s sharp criticism of the visit, saying it was not the first by a US lawmaker to Taiwan.

Kirby played down the news that Chinese fighter jets crossed the Taiwan Strait toward the island shortly before Pelosi’s plane landed.

“The United States is not going to be intimidated by threats,” he said.

“We have serious security commitments in the region … We take those commitments seriously”, he added, saying Washington would ensure that Pelosi had a “safe and secure visit”./ CNA