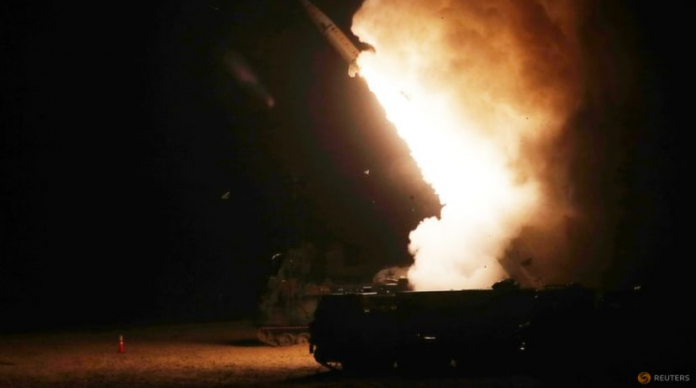 South Korea and the US military conducted missile drills in response to North Korea’s launch of a ballistic missile over Japan, as Washington condemned Pyongyang’s longest-range test as “dangerous and reckless”.

Nuclear-armed North Korea test-fired an intermediate-range ballistic missile (IRBM) farther than ever before on Tuesday, sending it soaring over Japan for the first time in five years and prompting a warning for residents there to take cover.

South Korean and American troops fired a volley of missiles into the sea in response, South Korea’s Joint Chiefs of Staff said on Wednesday (Oct 5), and the allies earlier staged a bombing drill with fighter jets in the Yellow Sea.

The military separately confirmed that a South Korean Hyunmoo-2 missile failed shortly after launch and crashed during the drill, but that no one was hurt.

The US military and its allies have stepped up displays of force and the White House National Security Council called the latest test “dangerous and reckless”.

US President Joe Biden and Japanese Prime Minister Fumio Kishida condemned North Korea’s test in the “strongest terms”, the European Union called it a “reckless and deliberately provocative action”, and UN Secretary-General Antonio Guterres condemned the launch and said it was a violation of Security Council resolutions.

The United States asked the UN Security Council to meet on North Korea on Wednesday but diplomats said China and Russia are opposed to a public discussion by the 15-member body.

It was the first North Korean missile to follow a trajectory over Japan since 2017, and its estimated 4,600km flight was the longest for a North Korean test, which are usually “lofted” into space to avoid flying over neighbouring countries.

Analysts and security officials said it may have been a variant of the Hwasong-12 IRBM, which North Korea unveiled in 2017 as part of what it said was a plan to strike US military bases in Guam.

Neither North Korea’s government nor its state media have reported on the launch or disclosed what type of missile was used.

The flight has increased concerns that North Korea may soon conduct an expected nuclear test, which would be the first since 2017.

South Korea’s defence minister, Lee Jong-sup, told parliament North Korea had completed preparations for a test and might use a smaller weapon meant for operational use, or a big device with a higher yield than in previous tests.

South Korean President Yoon Suk-yeol called the test “reckless” and said it would bring a decisive response from his country, its allies and the international community.

The launch was a “reckless and deliberately provocative action” that violated UN security council resolutions, a European Union spokesperson said.

Soo Kim, a policy analyst at research organisation RAND Corporation, told CNA’s Asia First that recent developments show that there is no intent on North Korea’s part to denuclearise.

“It means, of course, there’s a hard road for the United States and South Korea,” she added. “The parties are very serious about discussions.”

“But the fact of the matter is perception and abstract ideas about deterrence and security are very different from what actually happened on the ground.”/ CNA

Twitter
Telegram
Previous articleThai PM Prayut survives challenge but does this pave a way for Thaksin’s return?
Next articleElectric Vehicles in Malaysia: Moving Uphill from Niche to Mass Market