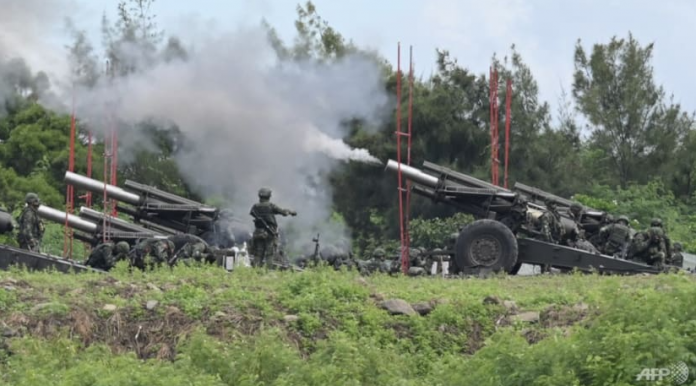 Taiwan held an artillery drill Tuesday (Aug 9) simulating a defence against an attack as its top diplomat accused Beijing of preparing to invade the island after days of massive Chinese war games.

China launched its largest-ever air and sea exercises around Taiwan last week in a furious response to a visit by US House Speaker Nancy Pelosi, the highest-ranking American official to visit the self-ruled island in decades.

The Chinese military said its Taiwan drills continued on Tuesday and involved air and sea units. The Eastern Theater command of the People’s Liberation Army said in a statement that it was conducting training exercises around the island, “focusing on joint blockade and joint support operations”.

Taiwan lives under the constant threat of invasion by China, which views its neighbour as part of Chinese territory to be seized one day, by force if necessary.

“China has used the drills and its military playbook to prepare for the invasion of Taiwan,” Taiwan Foreign Minister Joseph Wu told a press conference in Taipei on Tuesday, accusing Beijing of using Pelosi’s visit as a pretext for military action.

“China’s real intention is to alter the status quo in the Taiwan Strait and entire region,” he said.

Taipei’s drill started in the southern county of Pingtung shortly after 12.40am GMT (8.40am Singapore time) with the firing of target flares and artillery, ending just under an hour later at 1.30am GMT, said Lou Woei-jye, spokesman for Taiwan’s Eighth Army Corps.

Soldiers fired from howitzers tucked into the coast, hidden from view of the road that leads to popular beach destination Kenting.

The drills, which will also take place on Thursday, included the deployment of hundreds of troops and about 40 howitzers, the army said.

On Monday, Lou told AFP the drills had been scheduled previously and were not in response to China’s exercises.

The island routinely stages military drills simulating defence against a Chinese invasion, and last month practised repelling attacks from the sea in a “joint interception operation” as part of its largest annual exercises.

“NOT WORRIED”
The anti-landing exercises come after China extended its own joint sea and air drills around Taiwan on Monday, but Washington said it did not expect an escalation from Beijing.

“I’m not worried, but I’m concerned they’re moving as much as they are. But I don’t think they’re going to do anything more than they are,” Biden told reporters at Dover Air Force Base.

Taiwan’s Wu on Tuesday condemned Beijing for pressing on with military exercises around the island, accusing them of trying to control the Taiwan Strait and waters in the wider Asia-Pacific region.

“It is conducting large-scale military exercises and missile launches, as well as cyber-attacks, a disinformation campaign and economic coercion in order to weaken public morale in Taiwan,” he said.

Wu went on to thank Western allies, including the US after Pelosi’s visit, for standing up to China.

“It also sends a clear message to the world that democracy will not bow to the intimidation of authoritarianism,” he said. CNA

Twitter
Telegram
Previous article55th ASEAN Foreign Ministers’ Meeting: Much Ado About Everything (or Nothing)?
Next articleThailand’s Awkward Pursuit of American F-35As