HomeEconomicsHow Sri Lanka got itself into such a mess
Economics 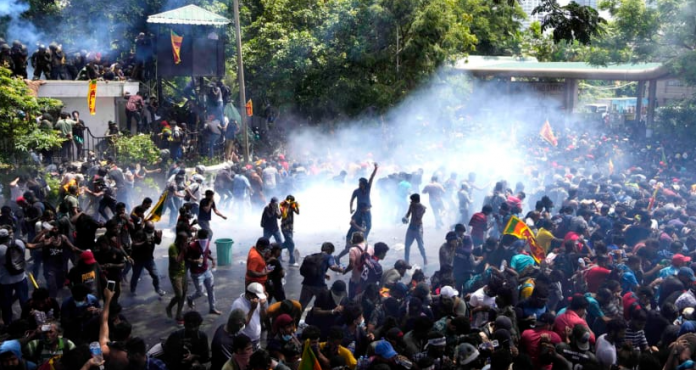 The chaos in Sri Lanka has deepened after the country’s president, Gotabaya Rajapaksa, fled to the Maldives. The president and his family left Colombo on a military jet just hours before he was due to resign in the face of massive popular protests which culminated on Jul 9 with crowds of demonstrators storming the presidential palace.

Rajapaksa is believed to be headed for the United Arab Emirates where it is thought he will resign his office. Ranil Wickremesinghe, the country’s prime minister, has taken over as acting president and has declared a state of emergency.

It is thought likely he will also resign under pressure from the Sri Lankan people who are blaming the country’s deep economic crisis on mismanagement and corruption among Sri Lanka’s political elites.

Over the past three months, the tiny Indian Ocean nation has sunk deep into economic malaise. Inflation is running at more than 50 per cent and is expected to continue to rise. There are shortages of food and fuel and the country defaulted on its foreign debt in May.

There is also political turmoil. In this situation, the role of the army will come into sharp focus. There have been reports that troops fired on protesters as they stormed the presidential palace, but army chiefs insisted they had only fired in the air in an effort to maintain order.

WILL THE ARMY TAKE OVER?
Many are asking whether the army will step in to run the government, at least until order can be restored and a new government formed. But while military intervention might restore order to the streets, it’s unlikely army chiefs will want to take a direct hand in government.

There are two reasons for this. The first is cultural. There have been occasions when the country could have buckled to the rule by the military. These were the ethnic civil war years between 1983 and 2009.

Many hold the view that it was the army which kept the nation from breaking up during this period before winning a decisive albeit controversial victory against the separatists.

Yet, despite the oversized role played by the country’s military establishment, years of hardship, war and human rights abuses, Sri Lankans have steadfastly held on to their democratic civilian government. There were coup attempts in 1962 and 1966 and again in 1991, but these were all thwarted by the civilian government.

The other reason is economic. The main problems facing Sri Lanka are a result of economic mismanagement and corruption. A new administration will need to quickly secure international loans or some other form of support to stabilise the economy and resume the importation of food and fuel. This can only be possible with a civilian leader at the helm of such negotiations.

The problem a military government would face is that the army is still discredited in the eyes of the international community as a result of mass human rights abuses committed during the civil war against the country’s Tamil separatists.

If an army general were to take power now, Sri Lanka will become a pariah – and would find it almost impossible to raise the foreign investment it so desperately needs.

The importance of choosing someone who is able to negotiate loans from international institutions such as the International Monetary Fund (IMF), the World Bank and the Asian Development Bank (ADB) was underlined when Rajapaksa appointed Wickremesinghe, the prime minister, to the finance portfolio.

Wickremesinghe had already announced a package of reforms designed to stabilise the economy and planned to present a debt restructuring plan to the IMF by August. CNA