HomeEconomicsIPEF: A New Challenge To India And South East Asia In World...
Economics

IPEF: A New Challenge To India And South East Asia In World Geopolitical And Trade Dynamism 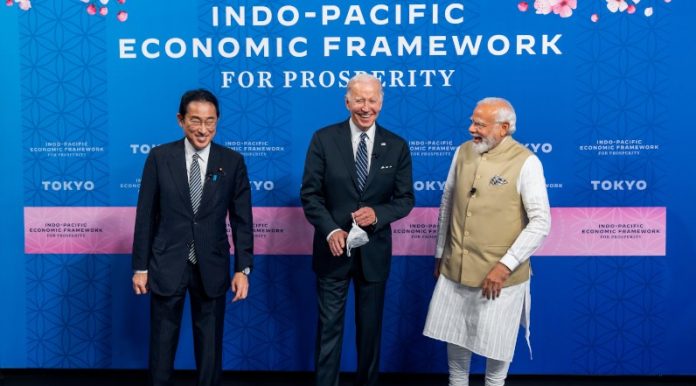 No doubt, IPEF (Indo-Pacific Economic Framework) is a an attempt by USA to reinstate its influence in Indo-Pacific region, initiated by former President Barak Obama, as a countermeasure to China’s growing geopolitical and geo-economic influences. The initiative began with security alignment between four nations, namely USA, Australia , Japan and India, forming Quad. IPEF is a further attempt for reinforcing the USA’s Indo-Pacific strategy through economic template, which remained under China’s clout so far. The interesting feature of the13 member IPEF is that larger number of members are from South East Asia. There were 9 members from South East Asia in IPEF.

Another important feature of IPEF economic club is that while the strategic aim is to resist China’s influence in the region, most of these South Asian nations already have FTAs with China, either through ASEAN-China FTA or RCEP (Regional Cooperation of Economic Partnership) . This raises eyebrows how IPEF envisions success in the US led Indo-Pacific strategy.

IPEF will focus on three pillars – Connected economy, Resilient economy and Free economy. Connected economy will pursue for high standards for digital economy, such as cross-border data flows and data localization, increased opportunities for SMEs to reap benefits from E-Commerce; Resilient economy refers to seeking commitment for price stabilization for supply chain among the members and Free economy will seek commitment for fair taxation system, stringent regulations for anti–monetary laundering and anti-bribery arrangements.

However, IPEF skipped FTA for economic arrangement. This raised questions over the guaranteed increased market accessibility. Arguably, this might be an hindrance for the interests for South East Asian nations, who are already engaged in FTAs with China, according to Mr James Crabtree of Singapore International Institute for Strategic Studies.

Besides, there are other observations which might lead other nations of Indo-Pacific region wobbling for joining the economic club. One of them is the absence of dispute settlement mechanism. Another observation is that with the absence of China and its allies, like Cambodia, Laos and Myanmar, the trajectory of decision making will be USA oriented geo-political and global economic dynamism.

Nevertheless, the involvement of large number of South East Asian nations portrays a positive signal for India to be signatory of IPEF, irrespective of the absence of FTA or guaranteed practical benefits. The significance of the 13 nation economic club harps on a larger share in India’s global trade. It accounted for nearly 30 percent of India’s global trade in 2020-21, comprising of 32. 8 percent in exports and 27.4 percent in imports. The USA is the biggest trading partner, followed by Singapore, Indonesia, South Korea and Japan.

Another observation is that Vietnam is emerging as a best possible alternative to China for supply chain. It is the second biggest import destination for critical imports of electronic items by India, after China

There are three benefits which could stem from IPEF.

First, India’s entry into IPEF will accelerate Act East policy. There are 9 countries from South Eat Asia among the 13 IPEF members. The main aim of Act East Policy, introduced in 2014, was to promote economic cooperation, cultural ties and develop strategic relations with countries in the Asia-Pacific region, thereby providing enough connectivity to the North East Region of India, according to an official press note.

A strong pro-India sentiment was built up in South East Asia with India’s unique financial management to insulate itself from global financial crisis in 2008 and 2009. And, India was recognized as strongly defiant to China’s growing authority in the region. But, the sentiment waned with India’s withdrawal from RCEP.

With the launching of IPEF, India re-emerged as a doyen to counter China in the region. This will pave the way for re-emergence of pro-India sentiment as India’s defiance against China will intensify, with the support of USA and Japan.

In summing up, IPEF will allow India to find new opportunities in the Indo-Pacific region which remained unearthed so far. It will pose a challenge to RCEP, which is dominated by Chinese influence. By Subrata Majumder/ EURASIAREVIEW

Twitter
Telegram
Previous articleTo Ban or Not To Ban? How Indonesia Can Overcome the Global Food Crisis
Next articleRevitalizing The ASEAN Amid Growing Challenges From China

Cash Payments in Post-Pandemic Southeast Asia: Phasing Out or Coming Back?