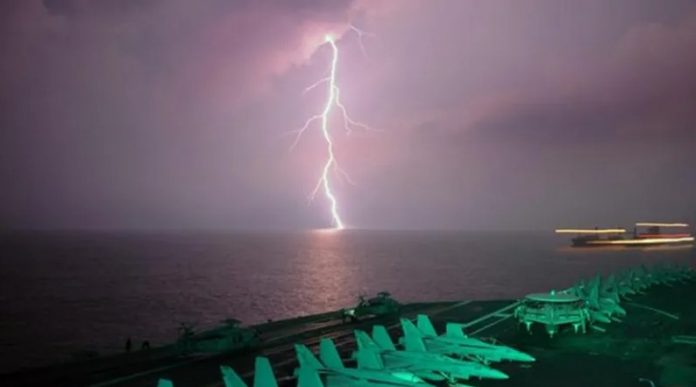 Security management is vital in an anarchic world of politics. Security management is bargaining to reach a mutually beneficial point on an issue of conflict, by ostracizing the notion of zero-sum gain. That requires capitulation from both sides on interests they consider that they have greater gain acting unilaterally but causing greater injustice and harm to the existing order of world politics and common interests.

The strategic policy is about a nation’s inspiration in terms of power in the global realm relative to other actors, where the military and economy contribute to the dynamics significantly.

The rivalry between two nations looms mostly due to a clash of existing interests. Such a clash is either rooted in a mutual geographic area or an economic regime of interest, such as the rivalry between India and China, or an indirect competition between aspiring nations for global hegemony; US and China. These clashes are inherent and engraved in global politics due to the anarchic character of world politics, which is powered by different nations having different aspirations and founding cultures. However, after World War two, nations have managed to live peacefully without any major armed conflict; thanks to multilateral treaties; the reason is not that the interests and aspirations of nations have been aligned since then, but due to the new world order that is built on the principle of “collective security” which functions based on multilaterally established rules, rather than the 18th-century “balance of power”. The concept stands for collective action of all nations; of course, peace-loving nations, against threats causing disruption in the world order. Such as unjust war, terrorism, piracy etc… The application of the concept has been challenged heavily due to the lack of harmony in interests of nations.

Based on the aforementioned concept, security management through diplomacy and collective bargaining has become the “modus operandi” of politics in the contemporary world. This is either due to the bitter experience of two world wars or due to the invention of weapons of mass destruction, i.e., “the nuclear dilemma”. Whatever the reason is, nations have finally learned to co-exist.

Security management is vital in such an anarchic world. Security management is bargaining to reach a mutually beneficial point on an issue of the clash, by ostracizing the notion of the zero-sum game. That requires capitulation from both sides on interests they consider that they have greater gain acting unilaterally but causing greater injustice and harm to the existing order of world politics and common interests.

Armed conflicts between rival parties are likely to be the consequences of the failure of security management, and are preceded by other means of turbulence; economic turbulence, sanctions etc.… The world has witnessed such scenarios throughout history, from Greek city states to today’s existing political order of nation-states. These armed conflicts are consequences of years of escalation between rivals where they are unable to mitigate the growing intensity of disagreements among parties. The Cuban missile crisis is an example, where the intensity of the rivalry reached its peak.

When we consider the case of China and India, there are areas of conflicting interests between parties that require mutual understanding and cooperation rather than competition in order to maintain regional peace and order.

It is steadily growing intensity between two states that leads them into an armed conflict or a more damaging state of affairs. In this sense, maritime routes in the Indian Ocean are vital trade routes for China since foreign demand for its products is increasing and, more importantly, in order to maintain a constant inward supply of energy for the Chinese economic engine. Chinese emphasis on the Indian Ocean creates a growing curiosity on the part of India since India considers the Indian Ocean as its ‘backyard’ (Csis.Org., n.d). Since the second world war, the US has been dominating the region while maintaining a stable relationship with India. As such, it is natural that the withdrawal of the US from the Indian Ocean will create a vacuum which India desires to fill.

It is the nature of the international politics that hegemonic power(s) tries to maintain the status quo it had created at any cost while the rising power(s) challenges the status quo and endeavours to establish a world order or regional order it sees as favourable to serve its interests (Allison, 2019).

Security Management in the Indian Ocean Region: Thucydides Trap
Thucydides Trap explains how a growing rivalry may end up in war. It contends that war is not a consequence of a single event but a series of events where growing rivalry transforms into more intense struggle and eventually occurring war or armed conflict.

In the case of China and India, their rivalry hovers around the Indian Ocean and the redirection of strategic engagement policies of both nations; India’s “look east policy” and China’s “look west policy” (Orfonline.Org., n.d & Burki, 2013).

The Indian Ocean
Competition between China and India is largely driven by their respective economies’ rapid growth in, and reliance on, seaborne trade and imported energy, much of which transits through the Indian Ocean. China’s dependence on seaborne trade and imported energy, and the strategic vulnerability that this represents, have been labelled as China’s “Malacca dilemma” after the Strait of Malacca, the key strategic choke point through which a large proportion of China’s trade and energy flows (Warsaw Institute, 2021).

Much of the activity associated with China’s Belt and Road Initiative (BRI) can be viewed as an attempt by China to minimize its strategic vulnerabilities by diversifying its trade and energy routes, while also enhancing its political influence through expanded trade and infrastructure investments. China’s BRI in South and Central Asia and the IOR, when set in context with China’s assertive behaviour in the East China Sea and the South China Sea and border tensions with India, is contributing to a growing rivalry between India and China. The emergence of a Sino-Centric Asian system is a counteragent to India’s interest, particularly since India has its own aspirations to great power status in Asia.

The growing Chinese naval presence in the Indian Ocean is another factor that drives India anxious.

Redirection of strategic engagement
India’s Look East Policy is an effort being made by the Indian government to cultivate and strengthen economic and strategic relations with the nations of Southeast Asia in order to solidify its standing as a regional power, which was initiated in 1992 (Haokip, 2011). This aspect of India’s foreign policy also serves to position India as a counterweight to the strategic influence of the People’s Republic of China in the region.

The fall of the Soviet Union illuminated lights on India’s economic vulnerabilities. Since then, it has been seeking to establish and harness strategic relationships with eastern countries to secure its economic well-being (Lalwani, O’Donnell, Sagerstrom, & Vasudeva, n.d.). Much of India’s Look East Policy involves Myanmar, which is the only Southeast Asian country that shares a border with India and is seen as India’s gateway to Southeast Asia.

Since 2003, India has also embarked on a campaign to forge free trade agreements with countries and regional blocs throughout Asia. India has also boosted its cooperation with Asian regional groupings such as ASEAN, the Bay of Bengal Initiative for Multi-Sectoral Technical and Economic Cooperation (BIMSTEC), and the South Asian Association for Regional Cooperation (SAARC).

With the establishment of the China-Pakistan economic corridor and Chinese road and belt initiative, China is looking the East to promote its economic efficiency. These initiatives are “provocative” in nature from the Indian perspective.

According to Prof Wang Jisi (a widely respected Chinese strategist who worked closely with Chinese leaders, including outgoing President Hu Jintao) ‘The Americans are looking towards the East, and we look towards the West’ (Agencies, 2012).

By West, Prof Wang means the West of China, starting from India, the sprawling South and West Asia and beyond. According to him, “China ignored the West for a long time, and it is time to rebalance not only for oil and natural gas but also for very big economic opportunities”.

Here comes the Thucydides trap.
When we invoke the Thucydides trap to explain these events and possible ultimate consequences, we can vividly see the growing rivalry between two nations with converging interests of both nations in the Indian Ocean and South East Asia leading to a clash of interests.

In this case, security management and diplomacy are vital to avoid even the minimum level of escalation between the two nations; given that both nations are the region’s economic hegemonies, this must be critical to the region’s stability. Security management entails identifying potential areas of mutual engagement, most notably economic engagement and rational understanding, for the sake of all nations’ economic well-being. It is intuitive that both nations are aware of years of economic development, hence they will prefer to avoid any escalation that will deprive them of the fruits of this development.

Finding mutual engagement includes working mutually to determine common interests and threats, such as to deter threats posed by terrorism and piracy in the Indian Ocean. This initiative will serve the interests of both nations since both nations are beneficiaries of the Indian Ocean. This will drive the engagement of navies in countering a common threat rather than intensifying their rivalry.

The United Nations is founded on the very concept of “Collective Security”. The concept is also tenable between two nations. Meanwhile, there is a stake for other small nations in the Indian Ocean region. Their contribution is priceless to the stability of the region.

During a great rivalry between two rising powers, there is much turbulence, and wrong estimations about power and geopolitical moves. What one state gains can be possibly considered as a relative loss by the other state, which agitates that state to react. What I can suggest is, small island nations like the Maldives and Sri Lanka must avoid escalating the rivalry by taking sides in the form of an alliance or other. They must be wise enough not to give a wrong impression to either side with their strategic actions./ By Ibrahim Nahushal/ eurasiareview