Islamisation in Malaysia Beyond UMNO and PAS 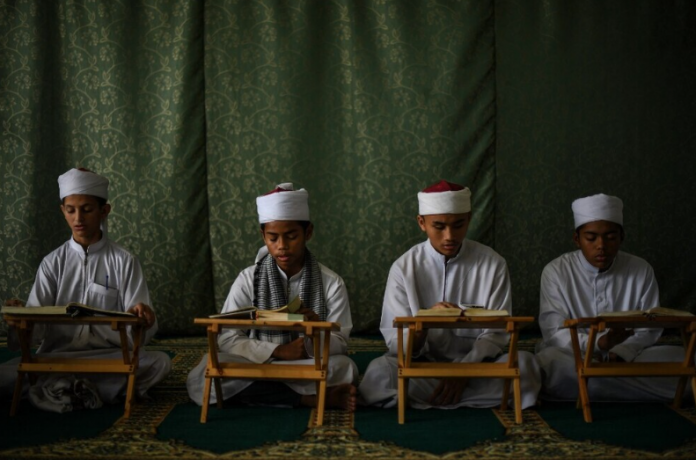 This article explains why the study of Islamisation in Malaysia should move beyond UMNO and PAS. The focus should instead be on how revivalist ideology has both penetrated the state apparatus and been reinforced by developments in society.

POST-ISLAMIC REVIVALISM AND THE PAS-UMNO ALIGNMENT

Today, UMNO-PAS relations are no longer defined by cries of kafir-mengkafir. This is largely due to UMNO’s increasingly conservative and revivalist outlook. The seeds of this revivalist outlook were sown in the early 1980s when Mahathir Mohamad was prime minister for the first time. During this period, revivalism was characterised by the desire to Islamise various aspects of life, including educational institutions, government agencies, and financial institutions. The Islamisation agenda was further entrenched during Abdullah Badawi’s administration, when there was a conservative backlash from Islamist groups in response to his vision of Islam Hadhari (Civilisational Islam). Conservative voices gained further foothold when Najib Razak demonstrated willingness to work with PAS when he was prime minister (2009-2018). This was most evident in 2016 when he voiced his support for Abdul Hadi Awang’s move to introduce the Syariah Bill Act 355, which would facilitate the implementation of harsher punishments under the Syariah Courts Act 1965. The UMNO-PAS alignment finally reached its peak in 2019 when both parties agreed to sign a National Consensus charter to formalise their political cooperation. This paved the way for the official founding of Muafakat Nasional (MN), the formal political alliance between the two parties.

IMPLICATIONS OF A GREENING MALAYSIA

However, cracks have appeared in the UMNO-PAS pact under MN. The two parties are currently part of the ruling Perikatan Nasional (PN) coalition which also includes Bersatu (Malaysian United Indigenous United Party), another UMNO splinter party. Yet, in the recent state elections in Malacca (2021) and Johor (2022), UMNO and PAS campaigned under separate banners: UMNO contested under its traditional BN banner while PAS joined Bersatu under PN. Going into the next general election, due by September 2023, it is unlikely that UMNO and PAS will reconcile, thus making the future of MN untenable unless major compromises are made.

Nevertheless, while current tensions between UMNO and PAS centre more on political differences, they converge in their approaches to religion, which is characterised by the intertwining of Malay nationalism and Islamism. Arguably, this is a result of growing Islamic revivalism in the last 40 years. To be sure, the revivalist ideologues who were active in the 1970s and 1980s in university campuses, mosques, and dakwah organisations now hold key positions in society: several of the prominent ones are in politics, the civil service, think-tanks, and institutes of higher learning.

As mentioned above, one of the clearest indications that the political leadership represents revivalist thinking was apparent when in 2016, UMNO leaders supported the amendment of Act 355 to raise the authority of the shariah courts. The initiative came from PAS president Abdul Hadi Awang who wanted to table a private members bill in parliament. Prime Minister Najib Razak pledged to support the bill. To be sure, it is unlikely that Najib represented revivalist thinking, and his support for the amendment was mainly political pragmatism. Yet, the same cannot be said about his party members who were proponents of Islamist activism in the 1980s. This includes Najib’s deputy prime minister, Ahmad Zahid Hamidi, who was an active student leader and close to Anwar Ibrahim.

If the amendment was passed, the maximum sentence that could be handed out by the shariah courts would be increased from a RM5000 fine, six lashes of the cane and three years jail to a RM100,000 fine, 100 lashes of the cane, and 30 years imprisonment. A desire for such laws is illustrative of a certain orientation of Islam. It would be inaccurate to argue—as several scholars have done—that UMNO is going through a process of Salafisation. Salafism refers to a puritan approach to Islam which is against innovations such as the celebration of Prophet Muhammad’s birthday, visitations to graves of pious persons, and communal feasting. Rather, Malaysia is faced with creeping Islamisation in accordance with Muslim Brotherhood ideology and strategy, aimed at strengthening shariah courts vis-à-vis civil courts, enhancing Islamic identity in the civil service and institutions, and popularising Islamic idioms in politics. These revivalists are not really interested in establishing a theocracy a la Iran for this would be impossible in a country like Malaysia that is not only multi-racial and multi-ethnic but, more importantly, is based on operationalising conservative Islam within the parameters of constitutionalism.

…one of the clearest indications that the political leadership represents revivalist thinking was apparent when in 2016, UMNO leaders supported the amendment of Act 355 to raise the authority of the shariah courts.

Revivalists attempt instead to promote Islamic perspectives in all aspects of social and political life. In 2001, then-Prime Minister Mahathir Mohamad claimed that Malaysia was already an Islamic state. However, the criteria he adopted in making such a declaration did not include the implementation of hudud laws, and instead he placed more emphasis on the Islamisation of institutions, the bureaucracy and policies. Today, PAS seems to accept this version of an Islamic state. This is in contrast to its stance in the 1990s which was more aligned to the creation of a theocracy and included the desire to replace the Federal Constitution with the Quran, to adopt the system of shura,[6] and to implement hudud laws.

Apart from laws, the growth of the religious bureaucracy is a prime indicator of the greening of Malaysia. In Malaysia, religion falls under the purview of the Islamic religious councils in each state. Members of the religious councils, including the mufti, are appointed by the respective state rulers. Yet, the Department of Islamic Development Malaysia (JAKIM), which functions as the federal government’s Islamic machinery, is a supra organisation with multiple times more funding and resources than the state bureaucracies, and its activities overlap with some of the latter’s functions. In fact, the Johor ruler has a number of times highlighted the need to reduce the size of JAKIM and its annual budget of over RM1 billion. Aside from its funding, the bigger issue would be to observe the background of its personnel. They are mostly graduates from the Middle East and from Malaysia’s own Islamic universities which were established during the revivalist era, as well as academics with revivalist ideas.

Revivalist discourse has also shaped the educational sphere in Malaysia. The International Islamic University of Malaysia (IIUM) was built on the goal of the Islamisation of knowledge, or at least on the promotion of Islamic perspectives on science, economics, and the humanities, among others. The university offers subjects such as Islamic finance and banking apart from traditional Islamic sciences such as jurisprudence, theology, hadith (narrations of the Prophet Muhammad), and Quranic studies. After IIUM was formed, several universities and Islamic departments in national universities either grew or were formed. The majority of these also uphold the Islamisation philosophy, or its calibrated version, referred to as the integration of knowledge. Underlying these ambitions is the need to shun or question Western perspectives that are deemed “secular” or “devoid of religion”. This ignores lessons from early Islamic history which showed that Muslims had learnt from the best practices of others including Western, Chinese, Indian, and indigenous societies, without undermining their belief in God. Despite this, the revivalists have conveniently segregated Islam from the rest. Other new universities include Universiti Sains Islam Malaysia (USIM), Universiti Teknologi MARA (UiTM), and colleges such as Kolej Universiti Islam Antarabangsa Selangor (KUIS) which do not challenge the Islamisation of knowledge paradigm.

Additionally, revivalism has grown from strength to strength in the realm of popular culture. Since the 1960s, Malaysia has hosted the international Quranic recitation competition, where participants compete to see who can read the Quran most melodically and accurately based on linguistic rules. Since then, revivalists have found new ways to combine Islam with popular culture. In the 1980s, for example, the number of women wearing headscarves grew exponentially, and the headscarf has now become a fashion industry and a standard marker of Malay identity. There was also the promotion of Islamic pop songs through nasyid in the 1990s, which continue to be popular today. Lately, the concept of hijrah—the journey Prophet Muhammad made from Mekkah to Medina in 622 to escape from the Quraish—has been extended to the spiritual journey of Muslims who become more religious and pious. Often, the decision to use a headscarf is a standard marker of the hijrah. Islamisation has also entered the entertainment scene where artists who become more outwardly religious are celebrated and praised for their successful hijrah, and for women, their decision to wear the headscarf.

Considering all these developments, Malaysian leaders today find it hard to push back against revivalism. For example, when he was the prime minister for the second time in 2018, Mahathir had to give in to conservative pressure. One such occasion was when he came out in support of controversial Indian preacher Zakir Naik being allowed to remain in Malaysia despite requests from the Indian government to have him extradited. Zakir is an Islamist preacher who has made many insensitive comments about non-Muslims.

Gone are the days when UMNO and PAS leaders publicly argue with one another regarding their commitment to Islam. UMNO had wanted to promote Malay identity with Islam as one of its pillars while PAS had preferred to prioritise Islam over Malay identity. Through such public engagements, observers knew where their leaders stood on various religious issues. However, this is not the case today; alliances are now forged and disagreements voiced mainly over political considerations.

Lately, Islamists and Malay nationalists have converged, although their convergence pivots towards the former. This is the outcome of Islamic revivalism since the 1980s. Proponents of Islamisation now occupy important positions in society, alongside the second and third generations of those who uphold the ideology. Additionally, Islamist ideas have now been integrated into policies, especially those concerning Islam and religious matters.

Under the current Ismail Sabri Yaakob government, there has thus far been minimal effort to counteract these Islamist trends. The leader’s priority is to reunite the country, as his political future depends on it. His slogan Keluarga Malaysia (Malaysian Family) is certainly a departure from Badawi’s Islam Hadhari. It also moves away from Najib’s Islam Wasatiyyah (Moderate Islam), which was emphasized after he suffered a decline in popular support in the 2013 election, and after interest in his vision for Satu Malaysia (One Malaysia) waned. However, while it may seem that Ismail Sabri’s vision for the nation is less Islam-centric, a more detailed analysis of his campaign reveals that Islam still takes centre stage, and only time will tell if he will be pressured or is inclined to adopt a more explicit Islamic approach. Nevertheless, Keluarga Malaysia is a platform for the prime minister to push back against conservatism in the form of Islamism and right-wing nationalism. Judging from Mahathir’s failure to curb revivalist trends after returning as prime minister the second time in 2018, future Malaysian prime ministers will face an uphill task if they wish to reverse the greening of Malaysia./ FULCRUM