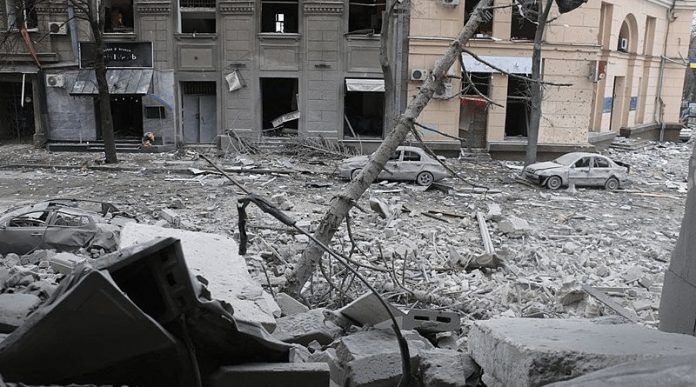 Malaysia’s foreign minister indicated on Tuesday that Kuala Lumpur would not impose sanctions on Russia for its invasion of Ukraine, although the country last week voted in favor of a United Nations resolution condemning Moscow’s aggression on its neighbor.

Sanctions should go through the United Nations, Malaysian Foreign Minister Saifuddin Abdullah said in response to a question in parliament about whether the government would sanction Russia for its reported targeting of civilians.

“Our principal is we don’t agree with unilateral sanctions,” Saifuddin said.

“As a member of the Human Rights Council, we have suggested first, a ceasefire and second, for the talks to continue. And if necessary, sanctions can be imposed. However, we have not reached that stage. If necessary, it should be done through the U.N.”

He said that countries needed to be careful about sanctions because they can affect civilians.

MIDF said in a research note in late February that the crisis in Ukraine would have minimal direct impact, as “the combined size of trade with Ukraine and Russia covered only 0.5 per cent of Malaysia’s total trade,” according to Bernama.

‘Call out this act of tyranny’

Malaysia’s Parliamentary Special Select Committee for International Affairs believes the country needs to take a stand on the events in Ukraine, starting with condemning Russia’s aggression.

“We call upon the Prime Minister Dato’ Seri Ismail Sabri and Minister of Foreign Datuk Seri Saifuddin Abdullah, representing the voice of concerned Malaysians, and as a member of the United Nations Human Rights Council (UNHRC), to make a stand and to call out this act of tyranny and oppression by the Federation of Russia on Ukraine with no delay in a show of support and comfort to the people of Ukraine,” the committee said in an open letter.

Opposition politician Ong Kian Ming, of the Democratic Action Party (DAP), was disappointed with the Malaysian statement that preceded its vote in favor of the U.N. General Assembly resolution demanding Russia immediately withdraw from Ukraine.

“Good that Malaysia voted in support of the UNGA resolution. But the text of our Permanent Rep[resentative] to the U.N. still refuses to condemn the Russian invasion of Ukraine,” he said on Twitter on March 3, a day after the vote.

“‘Urging both sides to continue on the peaceful path’ is not viable when one side is the clear aggressor. It’s like telling the bully and the bullied to make peace and be friends while the bully is still punching and kicking the bullied, who is lying on the ground.”

Other ASEAN members, such as chair Cambodia and Thailand, have not condemned Russia, even though they voted in favor of the UNGA resolution.

A total eight out of 10 of the bloc’s member states voted in favor of the resolution, in sharp contrast to its two joint statements on Ukraine. ASEAN works by consensus, meaning that its official language must be agreed by every member of the group, or dropped.

ASEAN’s first statement on Ukraine expressed concern at the situation, while the second called for a ceasefire. Neither mentioned the words “Russia” or “invasion.”

Meanwhile, unlike ASEAN or any of its fellow member-states, Singapore, in an unprecedented move last week, imposed sanctions on Russia, condemning it in harsh words.

Singapore said it would suspend exports of items that could be used as weapons in Ukraine, and that it would block some banking and financial transactions connected to Russia.

“We are witnessing an unprovoked military invasion of a sovereign state as we speak ….,” Singaporean Foreign Minister Vivian Balakrishnan told parliament the Monday before last.