What Does The US-ASEAN Special Summit Mean For Vietnam? 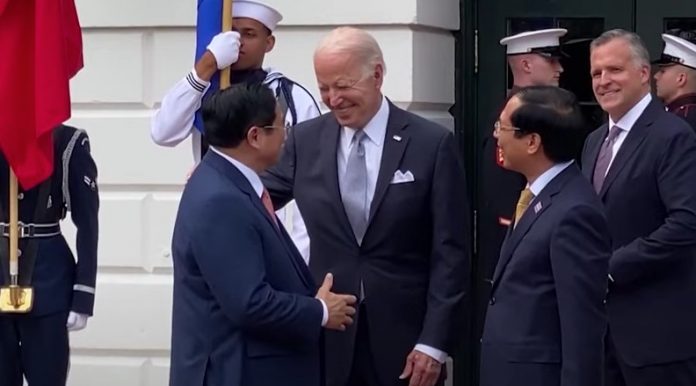 As part of his trip to the US to attend the ASEAN-US Special Summit held in Washington, Vietnamese Prime Minister Pham Minh Chinh had also a bilateral meeting with the US President Joe Biden on 12 May during which both leaders discussed bilateral relations as well as regional and international issues of mutual concern. The summit marked 45 years of US ties with Southeast Asia and 27 years since the US and Vietnam established diplomatic relations in 1995. Prime Minister Chinh stressed that bilateral ties are “special” as they have buried the bitterness of the past and working together to make the Comprehensive Partnership substantial and effective across all areas. Specific domain areas such as disease prevention and control, digital transformation, diversification of supply chains, climate change response, and human resources training were the main focus during the discussion.

Vietnam is a critical partner for the US in the Indo-Pacific, and their robust relationship continues to endure through mutual respect, collaboration, and a shared vision for a free and open Indo-Pacific. Vietnam enjoys a special place in Biden’s political and strategic outlook in the Indo-Pacific. Indeed, even before he became President, Biden had lobbied as a Senator with the government to promote relations with Vietnam. As a fast developing country within the ASEAN grouping, Vietnam has a lot to contribute for the economic development in the ASEAN region. From the US side, the Biden administration has prioritised disease prevention and control and galvanised the US Congress to allocate $21 billion to increase support for countries around the world with Covid-19 vaccine and drugs, medical equipment, as well as strengthen cooperation with countries to effectively respond to future pandemics around the world.

Indeed, both leaders agreed that climate change, pandemics and other non-traditional security challenges are global issues and require global responses in the spirit of multilateralism. Both leaders agreed on the need to respect independence, sovereignty, territorial integrity, and political institutions of countries; refrain from the use of force, and peacefully settle disputes and conflicts on the basis of international law and United Nations’ Charter; ensure freedom of navigation and overflight in accordance with the United Nations Convention on the Law of the Sea 1982 (UNCLOS 1982). Prime Minister Chinh extended invitation to Biden on behalf of Party General Secretary Nguyen Phu Trong and President Nguyen Xuan Phuc to visit Vietnam. A mutually convenient date shall be worked soon.

As part of his engagement Prime Minister Chinh also held talks with US National Security Advisor Jake Sullivan and conveyed the appreciation of the ASEAN member states in organising the US-ASEAN Special Summit, thereby demonstrating Biden administration’s strong commitment for the bloc and the region. Indeed since both countries normalised relations after a bitter past, both have shown willingness and commitment to exchange ideas and dialogue even when there are differences and maintaining a positive development momentum together. There has been better synergy between the two countries following the historic visit of Vietnamese Party General Secretary Trong to the US in 2015. This visit laid a firm foundation and created a basis for the Vietnam-US comprehensive partnership to develop intensively and extensively in the principle of respect to each other’s political institutions, independence, sovereignty and territorial integrity, for the sake of peace, cooperation and development in the region and the world, thereby bringing about practical benefits to the two peoples. Chinh sought US commitment to overcome the consequences of the war and help Vietnam in its pursuit of building an independent and self-reliant economy.

The central role of the ASEAN in general and Vietnam in particular underpins US cooperation in the Indo-Pacific and Indian Ocean regions. Unfortunately, not much headway could be made in Washington’s “Indo-Pacific Economic Framework” as the connotation of the concept needed further clarification. Indeed, if the US wants to unlock opportunities in an economically vibrant region where China’s influence is growing, engagement needs to be constant and consistent.

Indeed the ASEAN with a combined population of 667 million with an aggregate gross domestic product of $3 trillion and set to become the world’s fourth-largest economy by 2030, provides enormous opportunity for the US to make its “pivot to Asia” a reality. Since a “free and open Indo-Pacific” is the essence of this concept, a strong trade and investment framework between the US and the ASEAN need to be vigorously pursued. For example, as a member of the grouping, Indonesia is a crucial producer of commodities such as coal and palm oil and holds nearly one-quarter of the world’s nickel reserves, necessary for assembling electric vehicles and making it a key contributor to the total green-energy transition. If a regional institutional framework is developed to promote trade and investment, the region can be a very attractive economic hub that benefits the members of the bloc as well as to the wo

Prime Minister Chinh also met US Secretary of State Antony Blinken and conveyed appreciation for timely help to control the Covid-19 pandemic and also for providing Vietnam with nearly 40 million doses at a point of time when Vietnam was in difficulty. Vietnam’s commitments at the 26th United Nations Climate Change Conference of the Parties (COP26) found praise.

Prime Minister Chinh’s visit could provide the much-needed breakthrough for the creation of the ASEN-US strategic partnership. Indeed, over the past 45 years, ASEAN and the US have actively coordinated on the basis of respect for law and ASEAN’s centrality, thus building a foundation for trust, and building an open, transparent, inclusive regional structure in line with international law. There is a greater need for more trade and investment flows. Prime Minister Chinh promised Vietnam’s commitment to create the right environment for attracting the US investors and firms to expand their operation and connect them with the promising ASEAN market.

The US has huge experience and resources, which can be channelized to support ASEAN in green, sustainable development, economic restructuring, technological application, digital transformation, renewable energy, and comprehensive, and sustainable recovery efforts. Chinh added that ASEAN hopes that the US will promote cooperation initiatives within the framework of the Mekong-US Partnership, contributing to ensuring development quality, equality and sustainability. Other issues that figured in the discussion were how to improve healthcare capacity, share experience and transfer technologies in vaccine production, and help the bloc respond to other challenges like environmental degradation and climate change.

One positive outcome of the Special Summit was President Biden’s announcement of US commitment of more than $150 million which will help the 10-member bloc lure billions of US dollars from the private sector in trade, investment, supply chain stabilisation, healthcare, maritime cooperation, infrastructure development, energy, climate change response and sustainable development. Indeed, in view of the deteriorating security environment in the region, the US is now committed to elevate its relations with ASEAN and pledges support for ASEAN’s centrality and the ASEAN Outlook on the Indo-Pacific (AOIP).

It is remarkable that over the course of 27 years following normalisation, four consecutive US Presidents have paid visits to Vietnam one after another, each leaving very good impressions in the hearts of the two peoples. Even during the height of the pandemic, many US officials, including Vice President Kamla Harris and Defense Secretary Lloyd Austin visited Vietnam underlining how Vietnam factors in US foreign policy priorities. Earlier in November 2021, Prime Minister Chinh attended COP26 in Glasgow and had a brief meeting with President Biden but this time was the first visit to the US as the Prime Minister of the Socialist Republic of Vietnam.

Indeed, the geographical location of ASEAN between the Indian Oceans and the Pacific endows the bloc special significance, which is why the bloc is making every effort to play a central role in the evolving regional architecture. The members of the bloc have joined hands to build an ASEAN community according to its 2025 vision. From a poor and backward country, Vietnam has leapfrogged to become a medium-income country and aspired to become a developed and high-income country by 2045. In the realm of global affairs and in a world full of turbulence and strategic competition, Vietnam does not side with any group but chooses justice, fairness and goodness based on the principles of international law and the UN Charter. Vietnam chooses equality and shared benefits for all stakeholders.

Economically, the US is Vietnam’s second-largest market, while Vietnam is the US’s largest market in ASEAN and ninth-largest in the world. The Vietnam-U.S. trade agreement in 2000 was a launch pad that helped take the relationship between the two countries above and beyond. Bilateral trade in 2021, against all odds due to the COVID-19 pandemic, still reached almost $112 billion. Compared to 1995, that is an increase of almost 280 times. Viewed from all possible sides, the Vietnam-US relations have a promising future that shall contribute to the peace and stability in the Indo-Pacific region. By Dr. Rajaram Panda/ eruasiarevew

Twitter
Telegram
Previous articleAfter 36 years, a Marcos is again on the path to power.
Next articleIgnoring The Middle East At One’s Peril: Turkey Plays Games In NATO