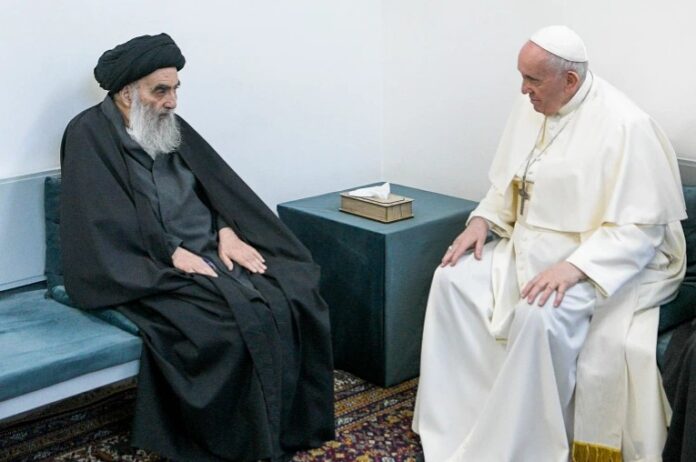 Pope Francis has met with Grand Ayatollah Ali al-Sistani, one of the most senior leaders in Shia Islam, in Iraq’s holy city of Najaf to deliver a message of peaceful coexistence, urging Muslims to embrace Iraq’s long-beleaguered Christian minority. 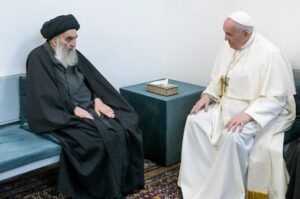 The historic meeting on Saturday in al-Sistani’s humble home was months in the making, with every detail painstakingly discussed and negotiated between the ayatollah’s office and the Vatican.

After the meeting, al-Sistani office released a statement that said religious authorities have a role in protecting Iraq’s Christians and that the Shia leader “affirmed his concern that Christian citizens should live like all Iraqis in peace and security, and with their full constitutional rights”.

The Vatican said Francis thanked al-Sistani and the Shia people for having “raised his voice in defence of the weakest and most persecuted” during some of the most violent times in Iraq’s recent history.

He said al-Sistani’s message of peace affirmed “the sacredness of human life and the importance of the unity of the Iraqi people”.

The 84-year-old pontiff’s convoy, led by a bullet-proof vehicle, had pulled up for the meeting along Najaf’s narrow and column-lined Rasool Street, which culminates at the golden-domed Imam Ali Shrine, one of the most revered sites in the world for Shia Muslims. He then walked the few metres to al-Sistani’s modest home, which the Shia leader has rented for decades.

A group of Iraqis wearing traditional clothes welcomed him outside. As a masked Francis entered the doorway, a few white doves were released in a sign of peace.

The closed-door meeting was to touch on issues plaguing Iraq’s Christian minority. Al-Sistani is a deeply revered figure in Shia-majority Iraq and and his opinions on religious and other matters are sought by Shia Muslims worldwide.

For Iraq’s dwindling Christian minority, a show of solidarity from al-Sistani could help secure their place in Iraq after years of displacement – and, they hope, ease intimidation from Shia armed groups against their community.

The visit was being carried live on Iraqi television, and residents cheered the meeting of two respected faith leaders.