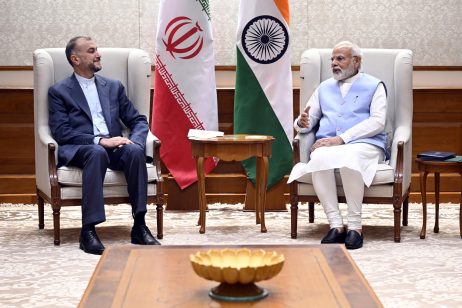 India and Iran need to rebuild their ties affected adversely by recent global events
Iranian Foreign Minister Hossein Amir Abdollahian’s first visit to India this week has many implications for bilateral relations, but it is the multilateral context and timing that stand out. This is the first visit by a member of the 57-member Organisation for Islamic Cooperation, which took offence to comments made in India on the Prophet. The controversy has overshadowed India’s other diplomatic engagements. As a result, his visit was an opportunity for New Delhi to project that it has successfully assuaged the Islamic world with the actions of the ruling BJP against its spokespersons. For New Delhi, which always seeks to run a balance in ties between the two rivals, the Iranian visit comes a week after that of Israeli Defence Minister Benny Gantz. It also coincides with the meeting of the Board of Governors of the IAEA in Vienna, which has passed strictures against Iran for its nuclear programme. For Mr. Abollahaian, the visit would be portrayed as a show of support from a powerful country. In addition, Iran and India discussed the situation in Afghanistan under the Taliban, just days after an Indian envoy made the first outreach to Kabul. To this end, India and Iran have discussed further operationalising the Chabahar port, where goods to Afghanistan were sent before the government in Kabul fell last year. Finally, against the backdrop of the Russian war in Ukraine, and western sanctions, Iran has also been keen to convince New Delhi to restore its crude oil purchases, which it cancelled in 2019, after threats of U.S. sanctions. While there was no public statement on the matter during the official part of the visit, External Affairs Minister S. Jaishankar’s statement was significant — he called for the U.S. and Europe to allow Iranian and Venezuelan oil back into the international market if they want India to lower Russian oil imports, accusing the West of “squeezing” all alternative sources for India.

On the bilateral front too, India and Iran have catching up to do, with many promises of the last summit in Delhi left unrealised. Instead of increasing Indian oil imports, investments in developing reserves, building up the Chabahar rail project and scaling up trade, India has drastically cut its Iranian engagement due to sanctions, while Iran has looked to China for more infrastructure investment. Bilateral trade dropped to just over $2 billion (2020-21) from $17 billion (2017-18). Ties also appeared to have been hit by New Delhi’s surprise decision to join the Israel-India-UAE-U.S. group, portrayed as an “anti-Iran” coalition, and by perceptions of Iranian support to Yemeni Houthis behind the drone attack on a UAE oil facility where an Indian was among those killed. Mr. Abdullohaian’s visit, and a possible visit by Iranian President Ebrahim Raisi, may be the start of a reset of traditionally strong ties even if it is one that is buffeted by developments in other parts of the world. The Hindu

Twitter
Telegram
Previous articleFresh From Latest Win, Thai PM Will Still Run The Gauntlet
Next articleBrother Can You Spare a Kyat? Currency Woes in Myanmar

‘It Doesn’t Matter If We Get Killed,’ Afghanistan’s Hazaras Speak Out

Playing Games In NATO, Turkey Eyes Its Role In A New World Order