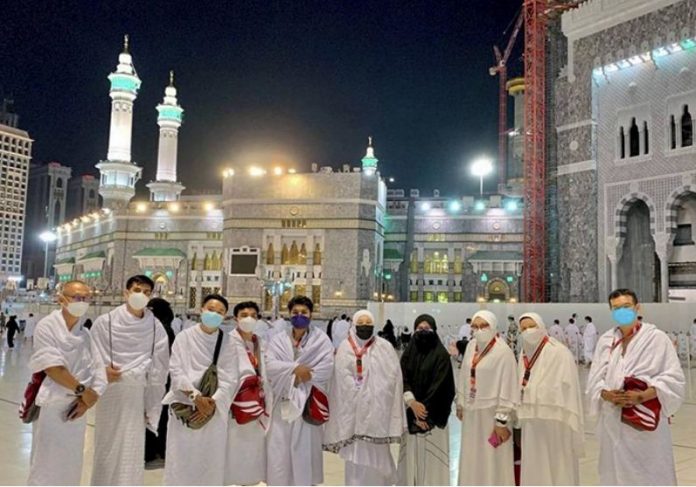 The dream of Malaysian pilgrims to perform umrah has finally come true after it was delayed for almost two years following the COVID-19 outbreak around the world, including Saudi Arabia, which forced the kingdom to close its borders to foreign pilgrims.

Eleven individuals who became the first group to perform the pilgrimage after the permission was given to Malaysians effective Oct 18, expressed their happiness and excitement as they did not expect to be invited early to the Holy Lands of Makkah and Madinah.

When contacted by Bernama, actor Ashraf Muslim, 40, who is now in the Holy Land, said he had been preparing to perform umrah under the new norms and according to the standard operating procedures (SOP) set by the Saudi Arabian government.

“Although they (Saudi Arabian) have their own set of SOP here, it has helped the pilgrims a lot in terms of performing umrah in the new normal,” he said.

Ashraf, who had performed the haj pilgrimage in 2019 and visited the Holy Land several times prior to the pandemic, also shared his experience of using the Eatmarna application introduced by the Saudi Arabian government.

He explained that the application was used to make early bookings, including for praying in the Grand Mosque (Masjid al-Haram) and the Prophet’s Mosque (Masjid al-Nabawi) as well as visiting the Rawdah, besides helping to monitor the safety of pilgrims.

“If we do not make an early booking, we are not allowed to pray in the area and have to wait for a new slot to open,” he said.

For financial consultant Nurfadzilah Abd Rahim, 38, who had long set an intention to visit the Holy Land, she never thought her first experience would be to perform the umrah pilgrimage under the new norms.

Nurfadzilah, who hailed from Kuantan, Pahang, said the use of face masks is compulsory in the Grand Mosque and Prophet’s Mosque while the congregational prayers are allowed at full capacity with no physical distance.

“I have mixed emotions (about this trip)…sad and happy at the same time. I planned to go on vacation once the overseas travel is allowed, but Allah invited me here first,” she said.

Sharing the same feeling is Shafwan Ramli, 27, who described the opportunity as double blessings as it was not only his first visit to the Holy Land but he also became among the first Malaysian pilgrims to perform umrah after the kingdom’s borders had been reopened.

“I receive the offer quite early and this is my first time performing umrah so I was not fully prepared. However, the guidance of mutawif has made the process easier for me,” he said.

How will loopholes in anti-hopping law affect Malaysian politics?