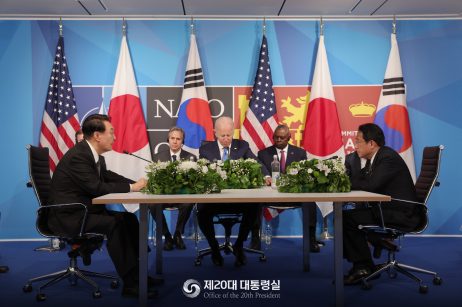 A meeting between the leaders of Japan and South Korea has shown the issues that divide them, including North Korea.

A crucial meeting between the leaders of the United States, South Korea, and Japan in Madrid on June 29 was nearly cancelled at the last minute.

Just a day before, the South Korean government said it was “unlikely” its president, Yoon Suk Yeol, would talk face-to-face with Prime Minister Kishida Fumio of Japan during the NATO summit, which both countries were attending as observers.

The threat to abandon the meeting was a reminder of the continuing tension between the two East Asian nations, even though Yoon, who took office earlier this year, is a conservative who has promised greater cooperation with Japan.

There was a minor breakthrough on the evening of June 28, when Yoon met Kishida at a dinner hosted by King Carlos of Spain and promised to “resolve pending issues between Korea and Japan as soon as possible” so that the two countries can “move forward in a future-oriented manner,” according to Seoul officials.

This appeared to break the ice, so at lunch time the next day, the two leaders sat opposite each other at a table, with Biden between them. He had been to South Korea and Japan the previous month, on his first presidential visit to Asia, and made a particular effort to express goodwill toward the newly inaugurated Yoon.

Also in the room in Madrid were U.S. Defense Secretary Lloyd Austin and Secretary of State Antony Blinken, along with their translators.

Pictures shared with the world’s press through Reuters reveal that the event was carefully stage-managed. The leaders did not smile, nor did they shake hands. There was no photograph of Yoon and Kishida in conversation at the dinner, although they did both appear in some formal group shots.

The Korea Herald described their encounters as “awkward yet cordial” and suggested the lack of a one-on-one meeting indicates that Japan has a lukewarm attitude toward engaging with Seoul.

One reason for the apparent caution could be that Kishida does not want the media to portray him as going soft on South Korea ahead of Japan’s upper house elections on July 10. His Liberal Democratic Party (LDP) is hoping to maintain the support of nationalists.

Conservative newspapers in Japan often print negative stories about South Korea, especially in relation to recent court rulings that Japanese companies must pay damages for forced labor. These claims relate to the era when Korea was occupied by Japan, more than 70 years ago.

There was no mention of these historical grievances in Madrid. The U.S. and Japanese leaders also chose to keep quiet about China when they were in the company of Yoon, who, despite promising a more unambiguously pro-American stance on the campaign trail, does not want to be seen as hostile toward China.

Nevertheless, Yoon’s attendance at the NATO summit prompted a cross speech by the Chinese ambassador to the United Nations.

Zhang Jun took to the floor of the assembly to complain that NATO’s eastward expansion sowed the seeds of conflict in Europe. He added that “the kind of turmoil and conflict that are affecting parts of the world must not be allowed to happen in the Asia-Pacific.”

Earlier in the week, Kishida had made his feelings about China plain when he spoke at the G-7 meeting in Bavaria, which preceded the NATO event in Spain. He complained about military and maritime expansion in the Indo-Pacific, warning that countries should not draw the “wrong lessons” from the situation in Ukraine.

Kishida also used the G-7 to highlight the issue of Chinese vessels intruding in waters surrounding the contested Senkaku Islands, which Japan administers but China claims as the Diaoyu Islands.

In Madrid, the focus switched to North Korea.

According to the South Korean presidential office: “The three leaders shared the view that North Korea’s continued progress in its nuclear and missile programs poses a serious threat, not only to the Korean Peninsula but also to East Asia and the international community.”

A close look at the diplomatic language reveals a few phrases that were designed to please the South Koreans, rather than the Japanese. The South Korean presidential office said that the leaders would work closely together so that North Korea “can return to the table of dialogue.”

The idea of reopening a dialogue with North Korea usually gets dismissed as a waste of time by the Japanese, who feel that it leads to half-hearted promises to disarm by Kim Jong Un, which are rarely honored.

Kishida made his attitude toward North Korea clear at the G-7 meeting in Germany, when he stressed the importance of “complete, verifiable, and irreversible destruction of all weapons of mass destruction” and called for greater action in order to prevent “North Korea believing that this is an opportunity to advance its nuclear and missile programs.”

He did not imply that dialogue, or a relaxation of the sanctions on North Korea, will help to achieve peace in the region.

In Madrid, Biden said that “our trilateral cooperation, in my view, is essential to achieving our shared objective, including a complete denuclearization of the Korean Peninsula and a free and open Indo-Pacific.”

The phrase “free and open Indo-Pacific” closely matches the rhetoric of the Japanese Ministry of Foreign Affairs and does not cause any problems for the South Koreans.

The idea of “a complete denuclearization of the Korean Peninsula” has been used by Biden a number of times, including when he met Yoon’s predecessor, Moon Jae-in, at the White House in May 2021. At the time, the two leaders spoke of the need for a calibrated, phased approach toward denuclearization and stressed the importance of using dialogue and diplomacy towards North Korea.

Yoon, however, prefers to emphasize the denuclearization of North Korea specifically, rather than the Korean Peninsula as such.

In Madrid, Kishida said he was “deeply concerned over the possibility of further provocation by North Korea, including nuclear testing. Through this meeting, I hope that trilateral cooperation regarding our response to North Korea will be solidified.”

A subsequent White House statement about the NATO meeting said Biden “underscored the United States’ unshakable commitment to the defense” of both Japan and South Korea.

When Yoon returned to Seoul following the NATO summit, he gave an optimistic reply when asked about relations with Japan: “We should not think that we cannot discuss the current and future affairs when there are historical disputes.”

The president added: “They all can be addressed at the same time, and we hold the belief that both countries would be able to resolve the past issues for the future.”

Much of the credit for the rapprochement goes to the South Korean Foreign Minister Park Jin, who studied at Tokyo University, as well as Oxford and Harvard. Park believes that South Korea needs to cooperate more closely with the United States and Japan in response to North Korean weapons tests.

The Korean foreign minister is expected to meet with his Japanese and Chinese counterparts, Hayashi Yoshimasa and Wang Yi, at a G-20 event in Bali, Indonesia on July 6 and 7.

Park is also planning to travel to Japan in mid-July, according to the Foreign Ministry. If all goes smoothly, a bilateral meeting between Yoon and Kishida could then follow later this year./ The Diplomat