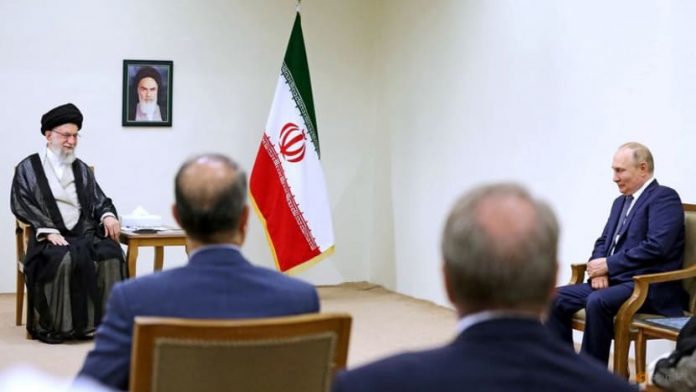 In Tehran, Putin also held his first face-to-face meeting since the invasion with a NATO leader, Turkey’s Tayyip Erdogan, to discuss a deal that would resume Ukraine’s Black Sea grain exports as well as the conflict in northern Syria.

Putin’s trip, coming just days after US President Joe Biden visited Israel and Saudi Arabia, sends a strong message to the West about Moscow’s plans to forge closer strategic ties with Iran, China and India in the face of Western sanctions.

He said Putin had ensured Russia “maintained its independence” from the United States and that countries should start using their own national currencies when trading goods.

“The US dollar should be gradually taken off global trade, and this can be done gradually,” Khamenei said during the meeting, in a spartan white room with an Iranian flag and a portrait of late revolutionary leader Ayatollah Khomeini.

Despite the suffering endured by ordinary people in war, Khamenei said Moscow had little alternative in Ukraine. “If you had not taken the initiative, the other side (West) would have caused a war on its own initiative,” he told Putin.

Washington said Putin’s trip to Tehran showed how isolated Russia had become in the wake of its invasion of Ukraine.

UNDER SANCTIONS
For Iran, also chafing under Western economic sanctions and at loggerheads with the United States over Tehran’s nuclear programme and a range of other issues, Putin’s visit is timely.

The Islamic Republic’s clerical leaders are keen to strengthen strategic relations with Russia against an emerging, US-backed Gulf Arab-Israeli bloc that could shift the Middle East balance of power further away from Iran.

Emboldened by high oil prices since the Ukraine war, Iran is betting that with Russia’s support it could pressure Washington to offer concessions for the revival of its 2015 nuclear deal with world powers. CNA