Türkiye calls on Armenia to learn its lesson, choose peace with Azerbaijan 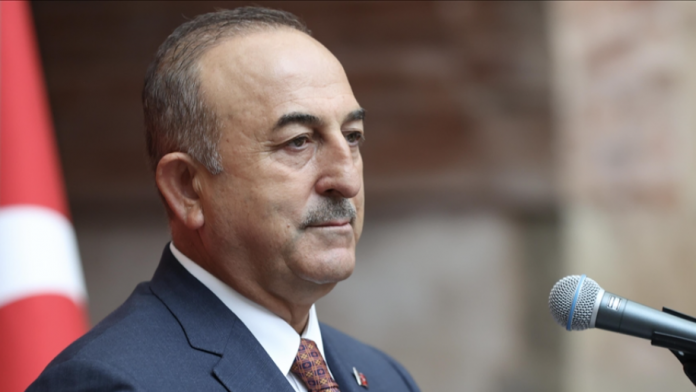 Armenia should stop its provocations along the border with Azerbaijan and instead make peace, said Türkiye’s foreign minister on Tuesday.

In the wake of Azerbaijan’s response to these provocations, “Armenia needs to learn its lesson and seek peace,” said Mevlut Cavusoglu.

Speaking at an event in the Black Sea province of Kastamonu, Cavusoglu cited the promise of Azerbaijan’s comprehensive peace proposal, while “Armenia, on the other hand, burned and destroyed everything while withdrawing from Lachin,” a strategic city recently returned to Azerbaijan.

Even though Türkiye and Armenia last year appointed envoys to normalize ties, Cavusoglu said, “Both the world and Armenia knows that this (normalization) process will not proceed independently of Azerbaijan. For full stability and peace in the region, the problems between all countries must be resolved.”

“We always stand on the side with dear Azerbaijan. Azerbaijan never stands alone,” he added.

The Armenian army on Monday carried out extensive provocations on the border towards the cities of Dashkesan, Kalbajar and Lachin, according to Azerbaijan’s Defense Ministry.

Armenian army saboteurs laid mines on land and roads between positions of the Azerbaijani army in various directions, the ministry said, adding that when the Azerbaijani military took steps to address the situation, intense clashes broke out between troops of the two countries.

There were casualties among military personnel from both sides, it added.

Relations between the former Soviet republics of Armenia and Azerbaijan have been tense since 1991, when the Armenian military occupied Nagorno-Karabakh, also known as Upper Karabakh, a territory internationally recognized as part of Azerbaijan.

In 2020, Azerbaijan liberated several cities and over 300 settlements and villages that were occupied by Armenia, and the fighting ended with a deal brokered by Russia.

Also commenting on ties with Greece amid recent tensions, Cavusoglu said that Türkiye has “seen the insincerity of Greece on every platform.”

He also called on Athens to seek Ankara’s friendship, saying, “Don’t trust others, you won’t gain any advantage by having someone else’s second-hand plane or gun. There’s no need to brag just because you’ve set up a few bases in your country. If you want to solve problems, be sincere first, but we don’t see this sincerity in Greece. We will do whatever is necessary to protect our rights and interests, to protect the rights and interests of the Turkish Cypriot people.”

Cavusoglu said that Türkiye needs to protect not only its interests but also those of Northern Cyprus. “We’re doing everything to protect our rights and interests in the Eastern Mediterranean and the Aegean, our continental shelf,” he said.

He also vowed that Türkiye will continue its energy exploration in the Eastern Mediterranean, calling this “our right and duty.”

Türkiye, a NATO member for more than 70 years, has complained of repeated provocative actions and rhetoric by Greece in the region in recent months, including arming islands near Turkish shores that are demilitarized under a longstanding treaty, saying that such moves frustrate its good faith efforts for peace.

Cavusoglu said the world is going through a delicate phase. “This stage is also a disadvantage, as it deepens uncertainties. Other than global actors, the pandemic crisis first shook the world. Just as we got through the pandemic and the world becoming normal, a war started in the middle of Europe,” he said.

He added that at least 60% of global conflicts are taking place close to Türkiye.

“Within the last 20 years, the Republic of Türkiye has become a very important regional and global actor. Türkiye is becoming a very important actor globally, not because it is the strongest country in the world but because we use our strength and power for peace. Because we are saying what is right and what is wrong and keeping our promises,” he added./ Anadolu Agency website