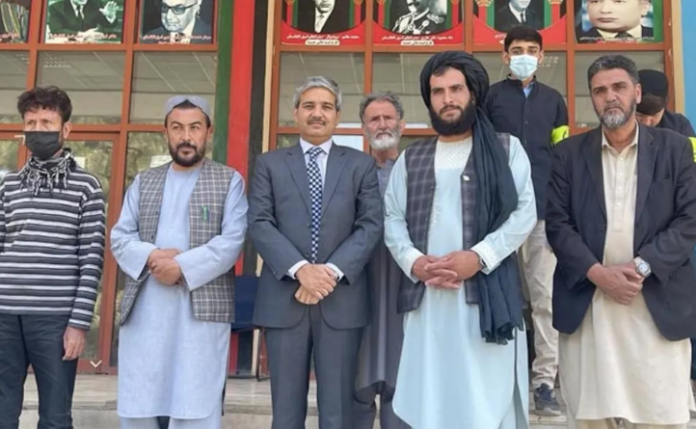 In a significant twist in regional relations, India is engaging with Afghanistan’s Taliban rulers. Following a visit to Kabul last month by a two-member delegation, India has re-established its mission there, effectively a recognition of the regime.

For years, India viewed the Taliban as a Pakistan proxy, but now that the group is in power in Afghanistan, differences between Kabul and Islamabad have begun to emerge. In turn, the Taliban has been seeking to extend its so-far limited circle of states with which it can interact. Being seen as an autonomous state gives Afghanistan some regional leverage. It may even send Taliban troops to India for training.

But it is unlikely to be plain sailing for relations. While the Taliban leadership may have toned down support for the Islamic States-Khorasan (IS-K) and even agreed to stop anti-India groups, India’s ruling Bharata Janata Party has its own hard-line anti-Islam political base to consider. The politics of Hindutva under the Modi government both limit what Delhi diplomats can do and how far a regime built on militant Islam can go in pragmatic accommodation with Prime Minister Narendra Modi’s India. The Taliban’s hard-line field commanders and fighters may not see the pragmatic side of ties with New Delhi. They could switch loyalties and join the IS-K or the groups Kabul has promised New Delhi to control.

Nonetheless, relations with India are also developing against the backdrop of the Taliban’s changing posture vis-à-vis jihad. In recent weeks the Taliban leadership – which is dominated by the powerful Haqqani group known for supporting hard-line jihadis – has been projecting its willingness to oppose any and all forms of jihad/extremism. A recent Loya jirga (grand assembly) held in Kabul under the auspices of the Taliban not only supported their “Islamic Emirates” and called for international recognition, but also claimed to oppose terrorism.

The Haqqanis, who are known to have collaborated with IS-K in Afghanistan, changed their position to call the organization a “terrorist group,” noting that cooperation with the group is against Islamic laws. The jirga also reaffirmed the Taliban’s earlier commitment that “Afghan soil won’t be used against any country and Afghanistan also won’t allow anyone to interfere in its internal affairs.”

While this reaffirmation works for Afghanistan’s neighbors including Pakistan, for India this position is especially important mainly because New Delhi can press the Taliban to eliminate all forms of support – logistical and ideological – for anti-India terror groups. Indeed, New Delhi has already presented its list of demands.

A Pakistani diplomatic source familiar with these developments who talked to Asia Sentinel on condition of anonymity said that Delhi’s ties with the Taliban have become possible because of the latter’s possible willingness to “protect Indian interests,” including taking steps against anti-India groups such as Lashkar-e-Taiba and Jaish-e-Mohammad. This could help India in Kashmir, where these groups operate.

For New Delhi, this is a major diplomatic success insofar as it could allow it further to cement its regional position vis-à-vis Pakistan, which seemed to have weakened following the fall of the Ghani regime last August. For Pakistan, however, this is concerning, primarily because, as the Pakistani diplomatic official said, India’s deep involvement in Afghanistan “could complicate Pakistan’s internal security environment,” which Pakistan is trying to improve through talks with the Tehreek-i-Taliban Pakistan (TTP), a group based in Afghanistan that seeks to impose its own version of Sharia law mainly in parts of Pakistan bordering Afghanistan.

Pakistan will be taking steps to counteract India’s geopolitical maneuvers but for now, the Taliban’s quest for strategic autonomy and need to gain international support and recognition has allowed the erstwhile ideological opponents to bridge gaps.

Unlike in the past, when it supported the National Resistance Front of Ahmad Massoud and then the Northern Alliance against the Taliban, India has changed its tactics now that the Taliban is firmly in power. Only a day after re-opening its diplomatic mission, India sent aid to help Kabul to tackle the damage caused by a recent earthquake. India’s Ministry for Externa Affairs said that “As always, India stands in solidarity with the people of Afghanistan, with whom we share centuries-old ties, and remain firmly committed to providing immediate relief assistance for the Afghan people.”

The “as always” indicates that New Delhi’s ties with the Taliban thus are gradually moving towards the level as they were during the Ghani regime.

Nonetheless, “Pakistan is not the only factor that could spoil Taliban’s ties with India,” noted the Pakistani official, who continued to add a note of caution. Pragmatism has its limits. The ideological distance between New Delhi and the Taliban remains too large to be closed quickly. By: Salman Rafi Sheikh/ asiasentinel