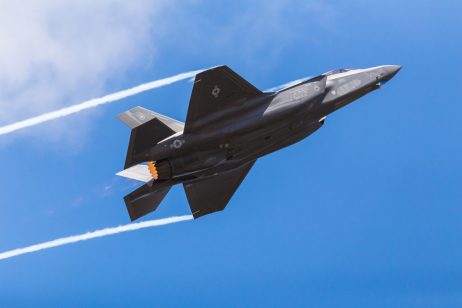 The Royal Thai Air Force (RTAF) has taken a further step toward joining the F-35 club. After much bickering and several budget adjustments in response to the grim economic outlook, Thailand’s House Budget Scrutiny Committee recently approved a budget of 369 million baht ($14.7 million) for the 2023 fiscal year to facilitate the RTAF’s procurement of two F-35s (variant A for conventional take-off and landing). These combat jets will cost 7.4 billion baht ($207 million) in total, and payments will be made in installments over a four-year period.

Additionally, the Committee has given the Defense Ministry a green light to invest 171.6 million baht ($4.8 million) in building an ammunition plant in Lopburi – a historic province in central Thailand that has recently seen a soaring wild monkey population.

From the perspective of ordinary Thais, who are more worried about deepening socioeconomic troubles, these new defense investments make little sense. Considering that Thailand has enjoyed cordial relations with all of its neighbors and major powers, the probability of an aggressive armed clash involving Thailand and another foreign military is very low. Besides, the RTAF is already well-equipped with a squadron of drones, a bunch of F-16 and modified F-5 jets, and 12 Swedish JAS-39 Gripen fighters which are now undergoing MS20 configuration upgrades to enhance ground and air-to-air combat capabilities.

The RTAF’s sluggish reaction to the incursion of Myanmar’s MiG-29 into Thailand’s territory earlier this June, as well as debt crises in neighboring Sri Lanka and Laos, have further fueled the general public’s disapproval of costly F-35A purchases.

From the military standpoint, however, Thailand is by no means a country in a low-threat environment. The security dilemma exists in Asia, arguably more than in any other region, and the potential for arms escalation is higher than ever amid China’s large-scale live-fire drills in retaliation for U.S. House Speaker Nancy Pelosi’s controversial visit to Taiwan last week. In the event of an unexpected attack, “outdated” F-16s and F-5s stand no chance against more sophisticated opponents, and one Gripen fleet is definitely not enough to serve as a credible air deterrence.

The RTAF could pick up more new-generation Gripens, which are relatively cheap and more than capable of meeting Thailand’s strategic requirements. But the future-oriented RTAF, dictated by its “quality over quantity” procurement motto and the ambition to become Southeast Asia’s top air force, has set its sight on acquiring fifth-generation stealth fighters. There are limited options available today, and American F-35s are generally regarded as the most technologically advanced. China’s J-20s are said to be deadly, but these are not available for export. The sales of Russia’s Su-57s, meanwhile, have been seriously affected by the slow rollout and economic sanctions.

Clearly, foreign policy considerations have contributed immensely to the RTAF’s strong preference for F-35s. Against the backdrop of growing geopolitical rivalry, Thailand has increasingly sought to diversify its arms suppliers to hedge between the U.S.-led Western bloc and the China-led “axis.” The Prayut Chan-o-cha government has already ordered submarines, frigates, and tanks from China. To maintain an equilibrium, it is only logical to buy American jets, even if China’s J-20s were to hit the market.

Then there is the effort to “bend with the wind.” China has seemingly turned inward, adopting a zero-tolerance COVID-19 posture and emphasizing “self-reliance” to retreat from the Western-led capitalist system slowly. This shift has prompted the Thai military leaders to lean noticeably closer to the U.S., especially in terms of defense. All key U.S. partners in Asia, except the Philippines, now have (or are about to have) F-35s, enabling them to enjoy greater interoperability with each other. To maximize its security, the Thai military cannot afford to be left out of this new defense “inner circle.”

Nevertheless, as pointed out by Ian Storey of Singapore’s ISEAS-Yusof Ishak Institute, there is a good chance that the Biden administration will not approve F-35 sales to Thailand due to the Thai military’s close ties to its Chinese counterpart. The fear of F-35 secrets being leaked to China via Thailand may outweigh the need to strengthen the U.S.-Thai alliance.

Perhaps sensing America’s reluctance, and recognizing Thailand’s own financial constraints, the RTAF has opted for cheaper unarmed F-35As. Citing the jet’s accommodating nature with regard to weapons modifications, Air Force Chief ACM Napadej Dhupatemiya noted that Thailand will equip unarmed F-35As with its own (existing and future) weapons systems. But no specifications were provided, which automatically raises questions about the warplanes’ effectiveness. Put bluntly, if the RTAF cannot unlock the F-35’s full potential, there is no need to buy it.

ACM Napadej further said that the RTAF hopes to secure 12 F-35As by 2032. If his dream comes true, he will need to accept that his new “elite unit” could drain the RTAF’s budget dry. The F-35’s operating and maintenance costs are simply too expensive, to the point where the U.S. Air Force cannot realistically afford to replace all of its old F-16s with F-35s. Many observers seem to agree that the F-35 program could end up dead if its developer Lockheed Martin cannot bring the costs down and address other technical shortcomings.

Ultimately, the RTAF’s procurement of American F-35As just comes across as too rushed, too challenging, and not cost-effective enough. The Diplomat